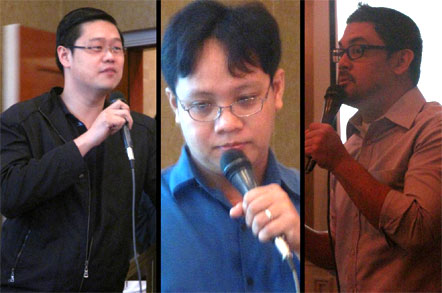 Policarpio discussed ways to maximize a company’s digital marketing campaign. He cited social media platforms like Facebook and Twitter as a cost-efficient tool. “What’s good in using these social media platforms is that you get your message across to your target market without spending anything.” He cited Union Bank of the Philippines’ Facebook account which, by that time, has around six hundred thousand followers.

Meanwhile, Lim emphasized on how the internet is leading change. He acknowledged the big role technology plays in consumer behavior. With the presence of internet, information is readily available to consumers, thus, changing the way they think, act and behave. He cited the popular I’ve Got a Crush on Obama video in YouTube by BarelyPolitical, a leading political satire site on the web, as an example. The video sparked comments from viewers worldwide and initiated a discussion of different ideologies among viewers. The video has more than 20 million views as of this writing.

Another example of a successful implementation of digital marketing campaign cited by Lim is Blendtec’s “Will it Blend?” videos. The video which has 9 million views highlights Blendtec blender’s unique feature which is the sturdiness and sharpness of the blades used for the product.

Constantino discussed the trends in digital marketing in the country. Yahoo! projects that by 2012, the country will have 35 million internet users. The leading motivations that drove people online include search (76%), then followed by instant messaging (68%), and email (65%). Meanwhile, 83% of the world’s population is part of a social network. The consumer’s changing behavior can be attributed to the rise of digital. In these times, more and more people from different age brackets and socio-economic classifications are becoming online. “In the information explosion world, the consumers control the media,” Constantino said. In order to reach the consumers, marketers ought to employ marketing techniques by maximizing digital platforms.

The event was made possible by Globe Business and the Philippine Daily Inquirer.