“The 1st BMAP Great Bank Fun Run event pushes through, rain or shine on Sunday, July 22. See you all there.” This was the announcement posted by BMAP (Bank Marketing Association of the Philippines) at various social media sites at the height of inclement weather brought about by a tropical typhoon weekend. The chosen venue was at Filinvest City (Filicity) in Alabang, not too far from the usual site of a popular and major annual marathon event. 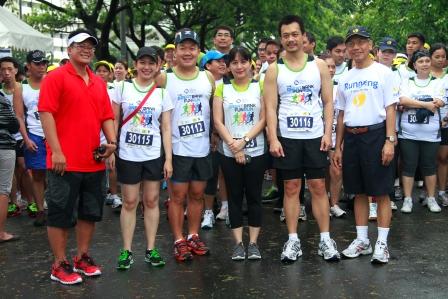 Bank employees, together with their families and friends alongside with different running groups and individuals arrived at the venue an hour before its 5:50AM gunstart for 10K. But BMAP and Without Limits’ Race Director Ian Alacar decided to move it at 6:30AM and 5mins thereafter for 5K and 3K. Why? It was still dark while some areas along the route were flooded due to overnight rains. This also gave a chance for latecomers to make it to their distances. The organizers also posted there was onsite registration between 4AM-5AM. While waiting, runners were already treated to coffee and juice samplings from its beverage sponsors and a special treat of pre-race bananas! The latter was something you don’t expect in most runs, so thank you on this one.

Emceed by the energetic Running Host Boy Ramos and BMAP’s Ms. Ann, both kept the mood alive from start to end. Opening remarks were delivered by BMAP President Mr. Allan Tumbaga of East West Bank who thanked all the runners who came and showed their support despite the typhoon. He also emphasized that BMAP’s goal was to promote the habit of saving among Filipino adults and children. Launched last year, the Kiddie Account Program is a program that encourages children 12 years old and below to develop the habit of saving money regularly by giving them easy and affordable access to the deposit facilities of the 11 BMAP member banks. After which, runners were able to stretch and wake their muscles up on a chilly race morning led by Kikay Runner.

It is interesting to note that the banking sector is always well-represented in most run events. Since this gathering was very much of their own, several internal running groups proudly wore their company visors and personalized singlets and looked forward to a great rainy run.

The race route was something new and unfamiliar to a lot of first timers running in Filinvest City. The place was partly residential having lots of trees and greeneries. One is reminded of running inside Camps Crame or Aguinaldo or a town in not too far Laguna with less public and private vehicles. The weather was simply perfect! The air was crisp and fresh and the slight drizzle made it more conducive to everyone despite the challenging uphills and downhills of the 10K and 5K routes. The maximum distance had two loops and lots of runners had a grand time snapping their cameras away upon passing by the posh Palms Country Club, a mini waterfalls from one of the hills, frogs that crossed their paths and the Asian Hospital & Medical Center from a distance.

The organizers made sure everyone was well-hydrated and the drinking stations were properly assigned every 1.5-2Kms. Bananas were located at the first and last stations. To those who forgot their GPS watches, there were tall distance markers and directional signages. Energetic and cheery marshalls were spotted at minor and major curves, intersections and provided non-stop greets and motivations to every runner who passed by. Used drinking cups were picked up by the marshalls themselves at a given cleanup time.

Volunteer photographers positioned at strategic spots/areas and made sure they captured awesome running moments.
At the finish line, runners claimed their loot bags and the most anticipated item came from Bangko Sentral ng Pilipinas’ 1986 People Power Revolution commemorative 10 peso coin. It is a limited edition item and this valuable and historic BSP memorabilia is a great alternative of a finisher’s medal which everyone had the privilege of taking home.

It was a breeze depositing and claiming personal stuffs from the baggage counter while a changing room/tent was also put up while it is fair to note that the portalets had an attendant who made sure each unit was well-maintained.

There were no fancy dance nor song numbers during the awarding ceremonies but all Top 3 male and female finishers of each three categories received exciting prizes from BMAP and its member banks plus co-sponsors. The event was personally graced by BSP Governor Amando Tetangco Jr. who appreciated the runner’s presence and support in their very first run-related fundraising event. The governor also assisted in the handing out of prizes to the fastest runners.

Congrats to Omar Seradilla and Kikay Runner Noelle de Guzman who excelled and were among 10K’s top finishers. We’re very proud of you!

Spotted among the running crowd was Mr. Patrick Concepcion, Condura Skyway organizer who was supposed to run in a separate event which was postponed but since he resides nearby, took advantage of still running on a Sunday and lending support to the cause. A group of runners were even on taper mode in prep for a major marathon event happening next week.

The event was capped by overflowing raffle prizes which consisted of PAL business class round-trip plane tickets, hotel accommodation, gift certificates, appliances and useful items from BMAP member banks to the delight of the crowd. Congrats to all winners! Better luck next time to the rest.

Overall, BMAP’s The Great Bank Fun Run lived up to its title. It was an intimately successful and organized debut run event from the banking sector which the running community won’t hesitate to support should they decide to make this worthy cause a yearly event. Perhaps a longer run distance next time? Congratulations and extra special thanks to the BMAP Officers, Without Limits, ProActive and Pinoyfitness for the opportunity of covering this event.