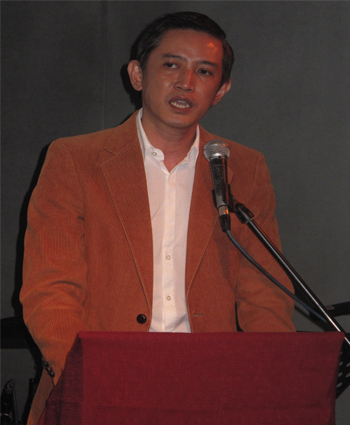 Rey Inobaya, country manager of Kinetic Worldwide – Philippines, was the guest speaker for the GMM. He discussed the effectiveness of out-of-home advertising and new trends and developments in the industry. “A few years ago at the turn of the millennium consumers already had access to a huge range of communication and entertainment devices yet somehow really momentous shifts in behavior are only now becoming obvious. Back in 2000 most of those devices represented mostly passive user experiences and few outside the obvious were considered ‘media’ from the perspective of their ability to carry advertising in any meaningful way,” he said.

Inobaya discussed a study conducted by their company on media’s influence over time. “Today we believe that social, broadcast and addressable media are converging in their reach of consumers and significance to brands and marketers. Our study predicts that the influence of broadcast media will decline, while social media and addressable media like OOH will continue to grow,” he discussed.

Out-of-home media, unlike any other forms of media, is a pervasive one. You cannot switch it off or turn it to another page. “In times of fragmentation of media consumption we see a new function of OOH advertising upcoming in brand building…State who you are, define your claim and your color, penetrate your brand world to the mass. This works in outdoor advertising whether the consumer is interested in or not… OOH will get a stronger role in brand foundation in the public. The street is a stage you can`t beat in the fragmented world of media,” he stressed.

Inobaya’s lecture provided the Association’s members with information on how to effectively use their out-of-home ads. Being different and creative will make a company’s ad rise above the clutter.

Certainly, it is true when they say that out-of-home advertising is here to stay!